Drinking Patterns and Their Definitions

The number of drinks a person consumes and the rate at which he or she consumes them influence how much alcohol enters the brain and how impaired that person becomes. Many people are surprised to learn what counts as a drink. The amount of liquid in one’s glass, can, or bottle does not necessarily match up to how much alcohol is in the drink. To facilitate research and clinical care and to help individuals make informed choices about how much alcohol they are consuming, public health agencies in the United States have established a definition of a standard drink, as well as definitions of various alcohol consumption patterns. These definitions facilitate objective assessments of how much a person is drinking, enable comparisons of alcohol consumption within and across studies, and help consumers follow low-risk drinking guidelines.

What Is a Standard Drink?

In the United States, a standard drink is defined as a drink with 14 grams (0.6 fluid ounces) of pure alcohol. This is found in:

Although the standard drink amounts are helpful for following health guidelines, they may not reflect customary serving sizes. In addition, while the alcohol concentrations listed above are typical, there is considerable variability in alcohol content within and across beverage type (e.g., beer, wine, and distilled spirits). For example, some light beers contain half as much alcohol as a regular beer, while some craft and specialty beers contain twice as much. Similarly, the alcohol content in wines can vary from 5% to 15%.1

According to the Dietary Guidelines for Americans, which are intended to help individuals improve and maintain overall health and reduce chronic disease risk, moderate drinking is defined as up to 1 drink per day for women and up to 2 drinks per day for men.2 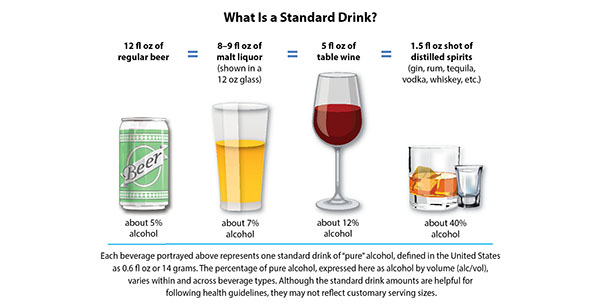 NIAAA defines binge drinking as a pattern of drinking that brings blood alcohol concentration to 0.08 grams per deciliter (0.08%) or higher. This typically occurs after a woman consumes 4 drinks or a man consumes 5 drinks in a 2-hour time frame.3

The Substance Abuse and Mental Health Services Administration (SAMHSA), which conducts the annual National Survey on Drug Use and Health (NSDUH), defines binge drinking as 4 or more drinks for a woman or 5 or more drinks for a man on the same occasion on at least 1 day in the past 30 days.4

Though definitions vary, some studies define extreme binge drinking as 2 or more times the gender-specific binge drinking thresholds (i.e., 10 or more standard drinks for men, and 8 or more for women).5 Other studies use a higher threshold that may6 or may not7 be gender specific.

SAMHSA defines heavy drinking as binge drinking on each of 5 or more days in the past 30 days.4

Standard-drink definitions vary widely across countries, from 8 grams of alcohol in Iceland and the United Kingdom to 20 grams in Austria. To assess the prevalence of high-risk drinking globally, the World Health Organization uses a measure called heavy episodic drinking, defined as consuming 60 grams of alcohol or more on at least one occasion in the past 30 days. In the United States, where a standard drink equals 14 grams, that would be 4.25 standard drinks. In China, France, Ireland, and Spain, where a standard drink equals 10 grams, 6 drinks on a single occasion would constitute heavy episodic drinking.

Because of the risks of drinking, certain people should avoid alcohol completely: